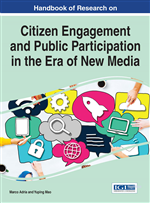 The goal of this chapter is to draw attention to the interrelation of multiple mediatized relationships, including face-to-face interaction, in local citizen engagement around biodiversity/environmental information. The authors argue that it is possible to fruitfully theorize the relationship between public involvement and the media without focusing specifically on the type of media. Their argument is supported by three examples of participatory projects, all connected with environmental issues, and in which social media-based and face-to-face interactions are closely interrelated. This contribution highlights the local uses of social media and the Web, and shows how engagement plays out in the interaction of multiple channels for exchange and the use of resources in a variety of media formats. In particular, new media significantly alter the visibility of both local actions and of the resulting data.