Is Science Built on the Shoulders of Women? A Study of Gender Differences in Contributorship 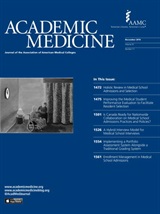 Purpose: Women remain underrepresented in the production of scientific literature, and relatively little is known regarding the labor roles played by women in the production of knowledge. This study examined labor roles by gender using contributorship data from science and medical journals published by the Public Library of Science (PLOS), which require each author to indicate their contribution to one or more of the following tasks: (1) analyzed the data, (2) conceived and designed the experiments, (3) contributed reagents/materials/analysis tools, (4) performed the experiments, and (5) wrote the paper.

Method: The authors analyzed contribution data from more than 85,000 articles published between 2008 and 2013 in PLOS journals with respect to gender using both descriptive and regression analyses.

Conclusions: These disparities have implications for the production of scholarly knowledge, the evaluation of scholars, and the ethical conduct of science. Adopting the practice of identifying contributorship rather than authorship in scientific journals will allow for greater transparency, accountability, and equitable allocation of resources.