Meeting the Challenges of Globalization while Preserving Institutional Singularity: The Case of Quebec CEGEPs 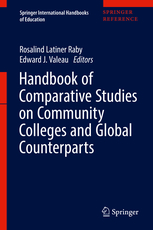 Focusing on the case of Quebec general and vocational colleges (collèges d’enseignement general et professionnel – CEGEPs), this chapter will explore how colleges’ responses to global challenges may relate symbiotically with the nature of the higher education system in which they are embedded, and thus preserve their singularity in the global era. CEGEPs interact with organizations across borders and across spatial levels, but their capacity to preserve their singularity relies on institutional initiatives consistent with and supported by the local and provincial contexts. College-university transfer is not an issue in Quebec because it is embedded in the system. CEGEPs, however, need to respond to the growing knowledge intensiveness of the economy, and they do so by establishing DEC-BAC dual degrees with local universities and as well as by developing a coherent system of CCTTs that conducts locally relevant research. CEGEPs have also responded to the global devaluation of diplomas by engaging in international activities that are consistent with Quebec’s knowledge diplomacy, i.e., a province, a region, or a country using international education activities to outsource its values, communicate the relevance of its political agenda, and increase its attractiveness.