Playing with Quantum Toys: Julian Schwinger’s Measurement Algebra and the Material Culture of Quantum Mechanics Pedagogy at Harvard in the 1960s

Gauvin, J.-F. (2018). Playing with Quantum Toys: Julian Schwinger’s Measurement Algebra and the Material Culture of Quantum Mechanics Pedagogy at Harvard in the 1960s. Physics in Perspective, 20(1), 8-42. 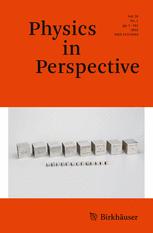 In the early 1960s, a PhD student in physics, Costas Papaliolios, designed a simple—and playful—system of Polaroid polarizer filters with a specific goal in mind: explaining the core principles behind Julian Schwinger’s quantum mechanical measurement algebra, developed at Harvard in the late 1940s and based on the Stern-Gerlach experiment confirming the quantization of electron spin. Papaliolios dubbed his invention “quantum toys.” This article looks at the origins and function of this amusing pedagogical device, which landed half a century later in the Collection of Historical Scientific Instruments at Harvard University. Rendering the abstract tangible was one of Papaliolios’s demonstration tactics in reforming basic teaching of quantum mechanics. This article contends that Papaliolios’s motivation in creating the quantum toys came from a renowned endeavor aimed, inter alia, at reforming high-school physics training in the United States: Harvard Project Physics. The pedagogical study of these quantum toys, finally, compels us to revisit the central role playful discovery performs in pedagogy, at all levels of training and in all fields of knowledge.